Reason Magazine has just published a disturbing story about a trucker who was recently illegally detained for 19 days without charges by Border Patrol agents at a roadblock North of Laredo, TX. See:

The trucker, who is a naturalized U.S. Citizen, exercised his right not to answer investigatory questions at the roadblock and was promptly removed by force from his vehicle and unlawfully detained for nearly three weeks before being released without charges.  This is a recurring theme in the Laredo Sector and, other than the length of the detention, mimics events from another recent assault at a Laredo Sector roadblock. See:

I note again that the Laredo Sector is under the operational control of Chief Patrol Agent Robert L. Harris and his command staff depicted below: 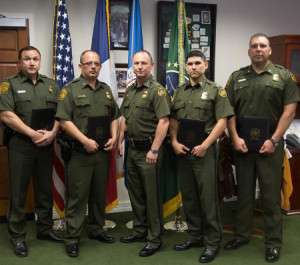 As such, Harris is ultimately responsible for these acts and should be held fully accountable for policies & practices in his sector that violate the rights of the American people. Contact information for CBP’s Laredo Sector is located below: