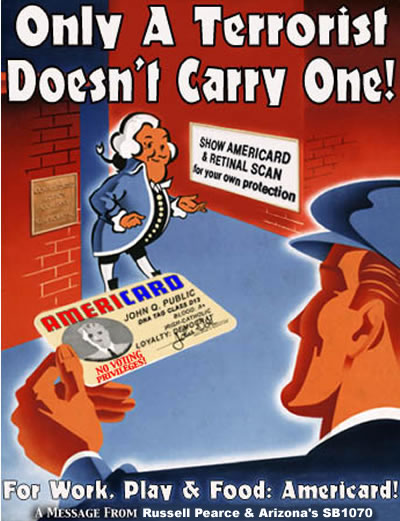 [Update - The Identity Project's scheduled interview on the Jay Lawrence Show later today has been postponed. An updated schedule will be provided when it becomes available]

I want to send my thanks to Representative Russell Pearce who was the primary sponsor of Arizona’s S.B. 1070 along with David Gowan, Chuck Gray, Linda Gray, John Kavanagh, Frank Antenori, Carl Seel and Ray Barnes.

In one fell swoop, these eight politicians have clearly shown the rest of the world what a burgeoning American police state looks like along with invalidating Arizona’s stop and identify statute that overzealous authorities will surely attempt to use in conjunction with the illegitimate police powers created in this new law.

Much of what I wanted to say about S.B. 1070 has already been said in an article posted on the Identity Project’s website. See:

“Weve been getting a lot of questions about the new Arizona immigration law, S.B. 1070.

In fact, the Identity Project’s Edward Hasbrouk will be a guest on KTAR’s Jay Lawrence show in Phoenix to discuss the implications of S.B. 1070 later today (see announcement).

What hasn’t been mentioned yet by anyone covering S.B. 1070 is its impact on other Arizona laws. Specifically, I refer to Arizona’s stop and identify statute:

This Arizona law was passed shortly after the Supreme Court ruled in Hiibel v Nevada, a case covered extensively by the Identity Project while it worked its way through the court system.

What does any of this have to do with S.B. 1070 and the legality of Arizona’s stop and identify statute you ask? As I hinted at above, most of the stop and identify statutes in the country today came about as a direct result of the Hiibel decision. In that decision, the Supreme Court upheld the legality of narrowly tailored state statutes empowering police to demand the name of an individual stopped based upon reasonable suspicion that he had committed, was committing or was about to commit a crime.

The court reasoned in Hiibel that the 5th amendment prohibition against compelled self-incrimination didn’t apply because in court Hiibel never raised the argument he reasonably believed providing his name would tend to incriminate himself or provide a link in the chain of evidence that could be used to incriminate himself:

“The Fifth Amendment prohibits only compelled testimony that is incriminating. See Brown v. Walker, 161 U. S. 591, 598 (1896) (noting that where the answer of the witness will not directly show his infamy, but only tend to disgrace him, he is bound to answer). A claim of Fifth Amendment privilege must establish:

"reasonable ground to apprehend danger to the witness from his being compelled to answer.... [T]he danger to be apprehended must be real and appreciable, with reference to the ordinary operation of law in the ordinary course of things, not a danger of an imaginary and unsubstantial character, having reference to some extraordinary and barely possible contingency, so improbable that no reasonable man would suffer it to influence his conduct. (quoting Queen v. Boyes, 1 Best and S. 311, 321 (1861)(Cockburn, C. J.))."

As we stated in Kastigar v. United States, 406 U. S. 441, 445 (1972), the Fifth Amendment privilege against compulsory self-incrimination protects against any disclosures that the witness reasonably believes could be used in a criminal prosecution or could lead to other evidence that might be so used. Suspects who have been granted immunity from prosecution may, therefore, be compelled to answer; with the threat of prosecution removed, there can be no reasonable belief that the evidence will be used against them. See id., at 453.

In this case petitioner’s refusal to disclose his name was not based on any articulated real and appreciable fear that his name would be used to incriminate him, or that it would furnish a link in the chain of evidence needed to prosecute him. Hoffman v. United States, 341 U. S. 479, 486 (1951). As best we can tell, petitioner refused to identify himself only because he thought his name was none of the officer’s business. Even today, petitioner does not explain how the disclosure of his name could have been used against him in a criminal case. While we recognize petitioner’s strong belief that he should not have to disclose his identity, the Fifth Amendment does not override the Nevada Legislature’s judgment to the contrary absent a reasonable belief that the disclosure would tend to incriminate him.”

On a side note, it should be noted that even with the existence of stop and identify statutes, legitimate police authority during stops based upon reasonable suspicion is very limited. We can see how limited by looking to the Supreme Court’s rulings in Kolender v. Lawson and Terry v Ohio:

…We have held that the intrusiveness of even these brief stops for purposes of questioning is sufficient to render them “seizures” under the Fourth Amendment. See Terry v. Ohio, 392 U.S., at 16 . For precisely that reason, the scope of seizures of the person on less than probable cause that Terry [461 U.S. 352, 365] permits is strictly circumscribed to limit the degree of intrusion they cause. Terry encounters must be brief; the suspect must not be moved or asked to move more than a short distance; physical searches are permitted only to the extent necessary to protect the police officers involved during the encounter; and, most importantly, the suspect must be free to leave after a short time and to decline to answer the questions put to him.”

Given these Supreme Court rulings regarding the application of the 5th amendment to compelled testimonial statements from individuals being detained or arrested, the catch 22 created by Arizona’s state legislature with the signing of S.B. 1070 into law by Governor Jan Brewer should be obvious.

S.B. 1070 specifically authorizes police to stop individuals to make immigration queries if they have reasonable suspicion to believe the individual has entered the country illegally and is not a U.S. citizen. Under such circumstances, an individual is guilty of trespassing in Arizona and illegally soliciting employment depending on the circumstances. Additionally, individuals here lawfully will be guilty of a state crime if they don’t have all their papers in order and on their person at all times.

The primary mechanism by which police officers will determine whether an individual is in violation of S.B. 1070 will be:

This means that unlike Hiibel’s case where providing a name did not tend to incriminate him, compelling an individual to provide a name in Arizona is now self-incriminating thanks to S.B. 1070. As such, ARS 13-2412 no longer meets Constitutional muster given the fact that it will be used extensively by the police to determine if an individual is trespassing, unlawfully seeking employment or doesn’t have all of his/her papers in order.

Given this turn of events, it looks like Pima County Sheriff Dupnik has it right. S.B. 1070 is a very bad law creating far more problems then it purports to solve. We should all thank Mr. Pearce for opening our eyes to the festering authoritarianism that’s slowly destroying this country.

As recommended by the Identity Project, individuals receiving unwanted attention from law enforcement personnel in Arizona should politely but firmly invoke their right to remain silent and refuse to provide self-incriminating identifying information. Your rights depend on it!