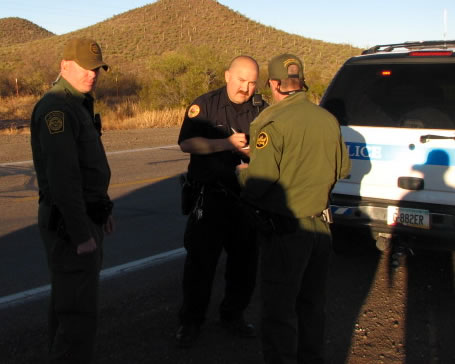 In all the cases referenced in the article, the courts have been dismissing charges against federal agencies but have allowed the lawsuits to proceed against local and state actors. The primary reason appearing to be because local and state actors are playing the largest role in civil rights violations, even if they are taking their marching orders so to speak from federal agents.

The gist of the article highlights this evolving relationship between local, state and federal enforcement jurisdictions. A relationship I’ve only lightly touched upon in this blog. Specifically local jurisdictions, many with their hands out in search of federal homeland security grants, are increasingly acting contrary to the best interests of the local populations they serve and more on behalf of the federal behemoth known as the Department of Homeland Security.

I hope to cover this issue in greater detail in the months to come and (thanks to links from readers of this blog) I’ve included several articles below highlighting this evolving enforcement trend.

For those who aren’t familiar with the Identity Project (IDP), here’s a brief overview from their website:

“IDP builds public awareness about the effects of ID requirements on fundamental rights. The First Amendment rights of assembly, petition, and speech, our fundamental right to travel, and our basic rights to hold property and transact business are all affected”

“IDP provides advice, assistance, publicity, and legal defense to those who find their rights infringed, or their legitimate activities curtailed, by demands for identification.”

If you haven’t had the opportunity to check out their website or subscribe to their RSS feed, I encourage you to take a closer look.

The articles included below come from readers of this blog and show a disturbing trend in which federal Border Patrol agents are involving themselves in local law enforcement operations instead of patrolling the border their being paid to secure:

PORT ANGELES — Police on Tuesday night were looking for a man who showed a barista at Just Rewards Espresso, 1001-A E. First St., a gun and took off with an undisclosed amount of money.

Witnesses said that the robber was in his 40s to 50s, had gray hair and was wearing a fake beard, a blue baseball cap and a tan jacket, said Deputy Police Chief Brian Smith.

“He displayed a handgun, and then he took only cash,” at about 7 p.m., Smith said.

“We aren’t going to disclose how much.”

Port Angeles officers, along with help from the U.S. Border Patrol and Clallam County Sheriff’s Office, created a perimeter of a 1-mile radius around the drive-through espresso stand.

They searched within that area for the robber.

“We have officers speaking with several people who fit the description of witnesses to see if we can rule them out or not,” Smith said at about 8:30 p.m. Tuesday.

Police had not yet arrested a suspect late Tuesday night.

The Port Angeles Police Department also had police dogs and their handlers searching for the man.

The police activated a reverse 9-1-1 system to area businesses in which a recorded message was phoned into the businesses alerting them to the situation.

“Some of them that had already closed will probably get that message in the morning,” Smith said Tuesday night.

CLALLAM BAY — A woman who had been arrested for investigation of driving while intoxicated late Tuesday night fled from a trooper, headed to a nearby home and — while still handcuffed — asked the people who answered the door for help, authorities said.

The couple, who the State Patrol did not identify, called 9-1-1 instead.

Trooper Eric Tilton was transporting Leiza from Clallam Bay to the Clallam County jail after arresting her on investigation of driving while intoxicated and several warrants.

In Clallam Bay, Leiza had declined to take a blood alcohol content test.

When Tilton went around the vehicle to offer them to her, she escaped the car and began running through the area brush.

Leiza was still handcuffed at the time.

State troopers began looking for her, with help from U.S. Border Patrol agents, who used dogs to track her.

About an hour later, a couple who lived along the highway phoned police to say the woman had showed up at their home.

“The couple was nice enough to call the police when she showed up their house looking for help,” Hedstrom said.

“She told them she had been arrested and needed some help.”

She made a first appearance at Clallam County Superior Court on Wednesday. The date of her arraignment was not available on Wednesday.

PORT ANGELES  A man who was shot in the face with a .22 caliber rifle Monday evening was treated and discharged and is recovering, the Clallam County Sheriff’s Office said today.

His roommate, Keith Berlin, 54, was arrested for investigation of second-degree attempted murder and taken to the Clallam County jail, according to a statement from the Sheriff’s Office.

Deputies and detectives obtained a search warrant and recovered the rifle and other evidence from the residence at 513 S. Alder Lane, in unincorporated area east of the Port Angeles city limit.

He was also arrested for investigation of unlawful possession of a firearm.

Berlin has not yet been formally charged.

Dozens of law enforcement cars flooded the area of the 500 block of Alder Lane, south of U.S. Highway 101 in Morse Creek canyon, on Monday night.

The Sheriff’s Office said today that an argument erupted between Griffith and Berlin when one interrupted a phone call of the other  though it was unclear who was on the phone.

Berlin left the living area where the argument occurred and returned with the single-shot rifle and shot Griffith, Chief Criminal Deputy Ron Cameron said in the statement.

Griffith was able to escape and ran to a neighbor’s house for help. It appears Berlin had been drinking.

The entire section of Alder Lane was blocked off as deputies investigated.

A cloudy sky made for an even darker night as a light rain fell while deputies investigated the shooting.

The canyon neighborhood is made up mostly of manufactured and trailer homes.

Deputies wrapped crime scene tape around the yards of three houses surrounding the one where the shooting occurred.